AN RE LAW FOR INDIA 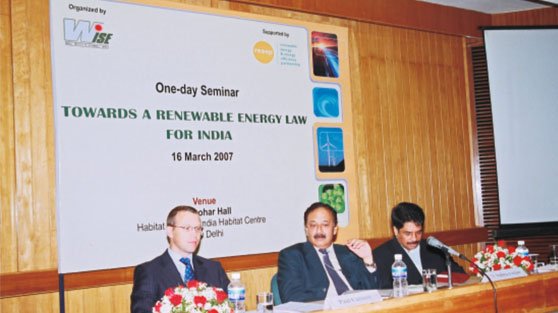 In 2006, WISE developed the first-of-its-kind Renewable Energy Law for India in collaboration with its legal consultant, the National Law School of India University, Bangalore. As part of its advocacy campaign, WISE organised three major seminars. The first one-day seminar was held in collaboration with the CII-Sohrabji Godrej Green Business Centre and inaugurated by Vilas Muttemwar, Hon. Minister of State (Independent Charge) for Non-Conventional Energy Sources, Govt. of India, on 25 August 2005 in New Delhi. The seminar resulted in the constitution of a Working Group comprising eminent experts under the able chairmanship of Dr Pramod Deo, Chairman, MERC, to pursue advocacy of the law for adoption by Parliament. The first meeting of the Working Group was held on 14 December 2005 at MERC, wherein an action plan for advocacy of the RE law for the period May 2006 to April 2007 was chalked out.

After the first seminar in August 2005 which spearheaded the R.E. Law movement in India, two more national seminars were held in 2007. The second seminar was organised in March 2007 in New Delhi, and the third was held on 24 August 2007 in Chennai. Supported by the Vienna-based ‘Renewable Energy and Energy Efficiency Partnership’ (REEEP) and its Renewable Energy and International Law (REIL) project, the seminar sought to critique the model R.E. law, seek more suggestions and tie up loose ends, so as to amend the draft law appropriately before submitting it to the Ministry of New and Renewable Energy (MNRE), Govt. of India. Senior members from the government, renewable energy industry, academia, NGOs, etc., participated in this interactive seminar.

Several mainline newspapers came forward to support WISE’s initiative and spread the renewable energy word amongst the masses through hard-hitting editorials and articles. 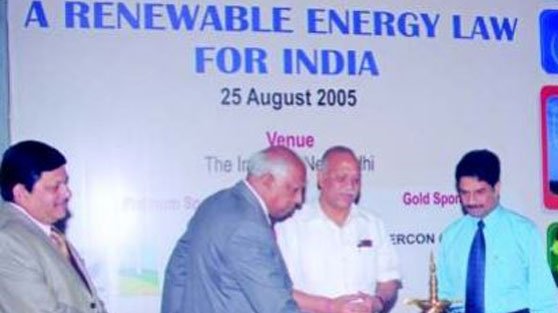