New Delhi: In what could have significant ramifications for productivity and returns from solar power projects in India, the latest study has found solar irradiance over the country over the past ten years was 7 per cent below long-term average.

The study by Solargis, a data and software firm for solar investments, highlights the struggles that solar asset owners face with the impacts of extreme weather and long-term irradiance variability – levels that deviated from the long-term averages are often used to underpin production estimates and financial models.

“Solargis’ irradiance maps indicate up to seven percent below average solar irradiation for the (Indian) sub-continent over the last four years – reflecting the concerns of local asset managers about a decline in irradiance levels,” the Slovakia based firm said in a statement. 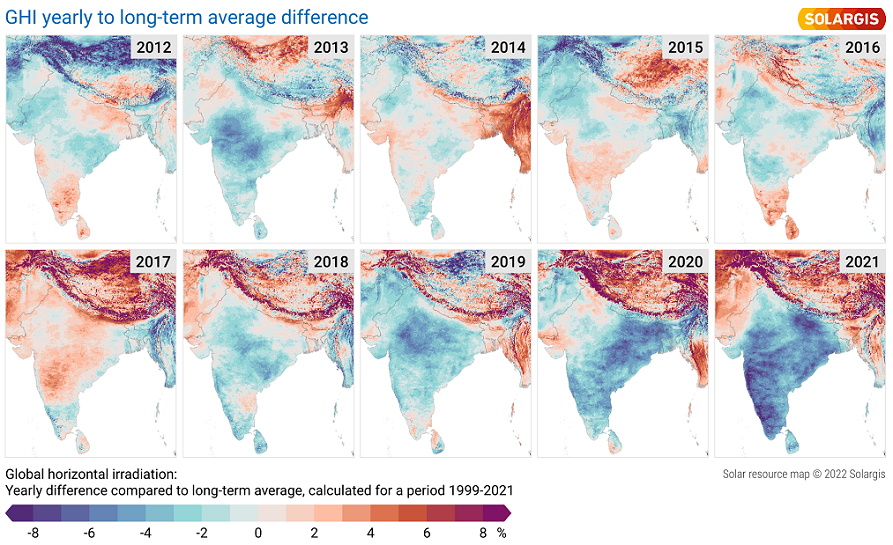 It added that for India the irradiance variability is particularly notable around highly developed areas where aerosols and cloud cover can impact resource availability.

“If this data is not considered by developers, it could result in solar farms underperforming, with wider implications for investor confidence in one of the world’s fastest growing solar markets,” the firm said.

The study is a ten-year analysis of solar irradiance — over the 2012 to 2021 period — released today by Solargis and has illustrated the impacts of significant resource variability on several key global solar markets including India, Australia and North America.

Significant variation both above and below the long-term averages has been witnessed across North America, India and Australia, highlighting the variability challenge presented by solar, a promising yet intermittent renewable energy source.