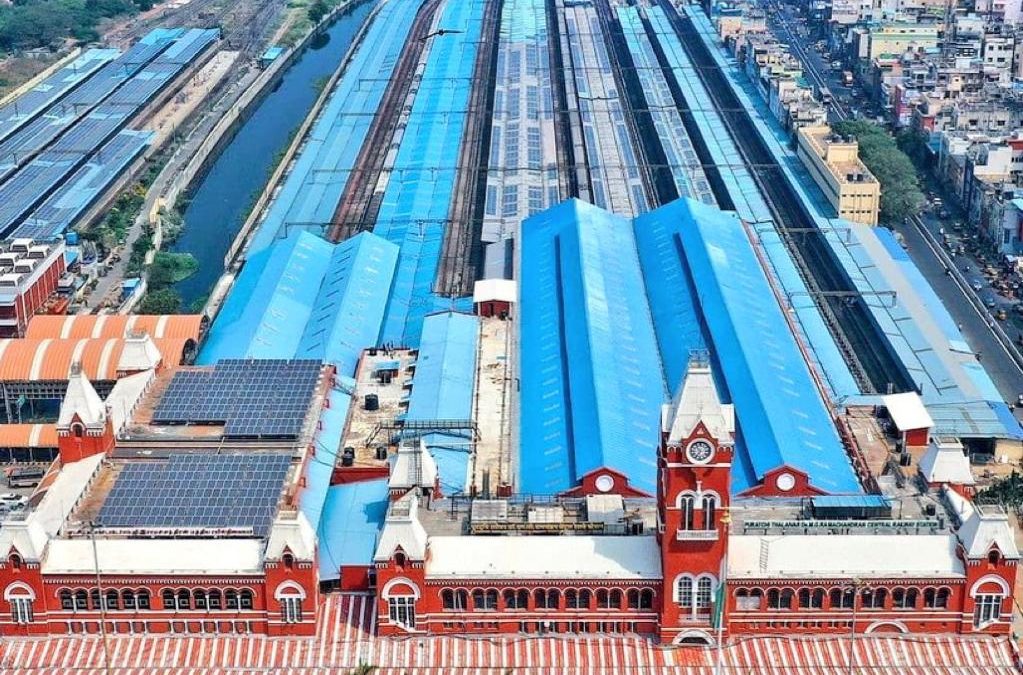 The Puratchi Thalaivar Dr. M.G. Ramachandran Central or Chennai Central railway station, under the South Central Railway (SCR), has met the 100% day energy requirement target by solar panels installed on the platform shelters of the station.

Informing about the same, Union railway minister Ashwini Vaishnaw tweeted, “100% Day energy requirement of Chennai Central Station is met by #SolarPower.” The station have installed solar power capacity of 1.5MW and all the electricity needs of the station during the daytime are met by solar power.

SCR is the first on Indian Railways to come up with the concept of ‘Energy Neutral’ railway stations, capable of meeting 100% energy requirements by tapping natural solar power through Solar Photo Voltaic (SPV) panels commissioned on about13 station buildings.

Tweeting drone image of Chennai Central station, DRM Chennai wrote: One more bird’s eye view of our own Puratchi Thalaivar Dr.M.G.Ramachandran Central or Chennai Central railway station! #DidYouKnow that we have an installed solar power capacity of 1.5MW and all the electricity needs of the station during the daytime are met by solar power?

Solar power panels have been installed at various locations and railway stations such as Chennai Central, MMC complex, Katpadi, Tambaram, Mambalam, Guindy and Chengalpattu suburban stations and several other railway offices. “All the power needs of 13 stations like lighting, fans, pumps and other electrical appliances are met through the solar energy generated and this is bringing down the net traditional energy consumption at these stations to zero,” The Hindu reported quoting senior officials.

With focus on harnessing renewable energy through windmills, Windmill Plants have been erected at Kayathar (near Gangai Kondan/Kadambur Railway stations) in Tuticorin district under Madurai division of Southern Railway, a Southern Railway release said. The total capacity of Wind Mill plants in Southern Railway is 10.5 MW, it added.

Informing that Southern Railway has achieved a savings of Rs.16.64 crores from renewable energy sources during the year 2019-20, the release said that the railway is committed to fast tracking its renewable energy projects with a vision to cut down power costs and support the Nation’s cause for ‘Atma-Nirbhar’.

In July, Vijayawada station in Andhra Pradesh, became the first railway station in the country to be covered with 130 kWp solar panels. Indian Railways plans to be a Net Zero Carbon Emitter by 2030. It had said that for meeting its traction power requirement, it plans to set up solar plants on unused vacant railway land. It also plans to install 20 GW land based solar plants.