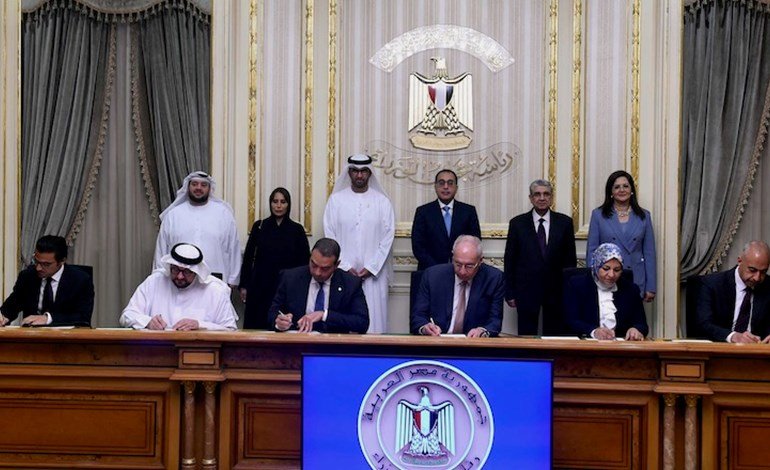 Masdar and Hassan Allam Utilities have signed two memorandums of understanding with Egyptian state-backed organisations to cooperate on the development of up to 4GW of green hydrogen production plants in the Suez Canal Economic Zone and on the Mediterranean coast.

The Egyptian organisations include the New and Renewable Energy Authority, the Egyptian Electricity Transmission Company, The Sovereign Fund of Egypt, and The General Authority for Suez Canal Economic Zone.

Masdar and Hassan Allam Utilities said they see Egypt as a hub for green hydrogen production, targeting the bunkering market, export to Europe, and boosting local industry.
Hassan Allam Holding chief executive Amr Allam said the first phase of the project would set up a green hydrogen manufacturing facility that would be operational by 2026, producing 100,000 tonnes of e-methanol a year for bunkering in the Suez Canal.

“The electrolyser facilities in the Suez Canal Economic Zone and on the Mediterranean could be extended to up to 4GW by 2030 to produce 2.3 million tonnes of green ammonia for export as well as supply green hydrogen for local industries,” he added.

Masdar chief executive Mohamed Jameel Al Ramahi said: “These agreements represent a vital step forward in the development of the green hydrogen economy for both the UAE and Egypt, and will play a significant role in our two nations’ decarbonization efforts.

“By working with partners such as Hassan Allam Utilities, we can help the green hydrogen market achieve its full potential over the coming years and play its part in supporting the global energy transition.”