Last month, the power ministry had notified a scheme for flexibility in power generation through bundling thermal and hydro with solar and wind power.

In a bid to meet the ambitious 500 Gw renewable energy target and tackle the annual issue of coal demand supply mismatch, the union ministry of power has identified 81 thermal units which will replace coal with renewable capacity by 2026.

Coal-based power generation units which have high tariffs have been identified by the ministry which will operate at a technical minimum (operating ratio) of 40 per cent and balance generation capacity will be met by a renewable energy source. 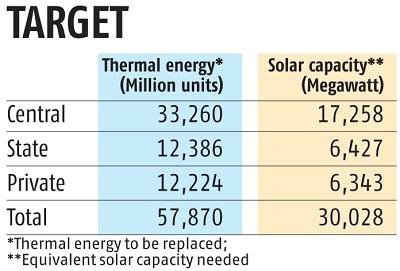 “It has been found that about 58,000 million units of thermal power generation in the central, state and private sector can be substituted with renewable energy (RE) generation. A RE capacity of about 30,000 MW would be required for the purpose,” said the ministry.

While the list includes the prominent players of the sector, the note said it is “indicative and not exhaustive.” Any other power plant is also allowed to blend renewable energy with conventional power. The ministry’s estimates indicate that this would help conserve 34 million tonne of coal and reduce carbon emissions by 60.2 million metric tonne.

Last month, the power ministry had notified a scheme for flexibility in power generation through bundling thermal and hydro with solar and wind power. It allowed conventional power generators to set up renewable capacity at their units and sell at average rates.

The ministry said this is in line with India’s commitments at the recent COP26 where the country committed to add 500 Gw of renewable energy capacity by 2030 and also aims to be a Net Carbon Zero economy by 2070. India has also committed to reduce its carbon emissions by 1 billion tonne by 2030. While the country has not committed to an expiry date of coal, it plans to “phase down” coal in the coming decades.