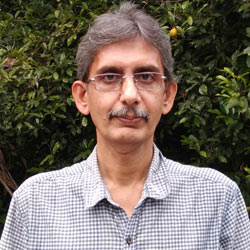 S P Ravi has been working in the field of river conservation (with special focus on rivers, especially river basin management and inter-state water issues involving Kerala) and other environmental activities since 1990. His reservoir operation and management strategy developed for the Chalakudypuzha river basin, Kerala, was a unique model developed in the state.

Ravi’s work has contributed to changing the perspective on rivers from an engineering based ‘river development’ worldview to river conservation and restoration. Due to his contribution, the need to look at river systems in their entirety and the significance of ‘flow’ are now being recognised. Post the 2018 floods, he and his team are involved in real time monitoring of flood possibilities in the Chalakudypuzha river basin. Ravi is hoping to develop a comprehensive River Action Plan for the Chalakudypuzha river basin through multilevel collaborations.

Ravi is co-author of ‘Tragedy of Commons – Kerala’s Experience in River Inter-linking’ and ‘Linking Lives, Reviving Rivers’. He occasionally writes in newspapers and periodicals on various environment related issues and topics, conducts classes at various educational institutions, and present papers on water, electricity and environment at seminars and workshops across India. In addition, Ravi also provides inputs on policy aspects related to water, environment and energy to state and national governments.

Ravi is concerned that “our nation is facing severe adverse impacts of natural resource depletion and pollution of air, water and soil. In addition, India and its South Asian neighbours are among the regions expected to be worst hit by the climate crisis.” He believes that “inter-generational equity needs to be ensured in planning and action, and that sustainable living and climate resilience holds the key to the future. Key sectors to be concentrated on are water, energy and agriculture, while key regions that need to be focused upon are the Himalayan region, the western ghats and the east and west coasts. Eco-restoration of the western ghats and rejuvenation of river systems are critical for the survival of peninsular India.”